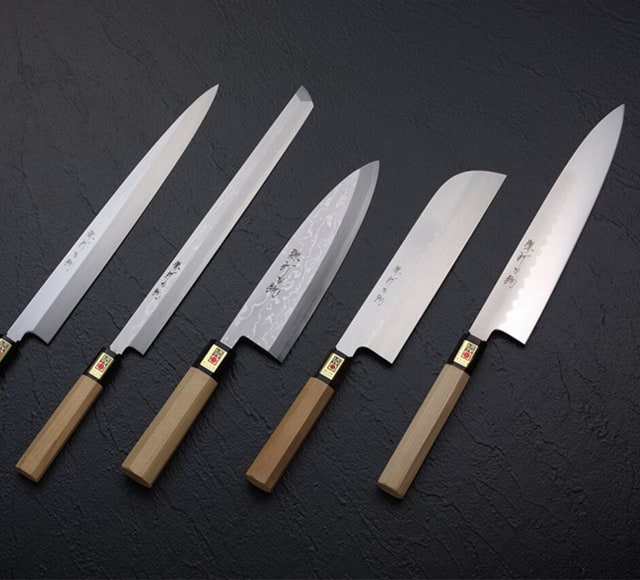 There are so many different shapes, sizes, handle types, and materials to wrap your head around, that is is easy to get overwhelmed.   Don’t worry.  After reading this guide, you will be able to distinguish and choose the best Japanese knife types for yourself!

The two main differences between each type is the intended usage, and the bevel/grind of the blade.

Western style knives all have double-bevel blades, which means they are sharpened on both sides. Typically the bevel tapers equally on both sides, although some knives may have a steeper angle on one side.

The original purpose of Western style knives in Japan were to cut meat, and prepare Western cuisines. They were thus built to be sturdier and less delicate that traditional Japanese knives. These days, many Western style knives have all-purpose usage, and are used for a wide range of tasks (i.e. gyuto, santoku).

Most — but not all — traditional Japanese knives have single-bevel blades. This means they are sharpened on one side only. The bevel is typically tapered to the right side, making it suitable for right hand use only.  Left-handed Japanese style knives are rare, and must be custom ordered.

A single bevel blade is more suitable for preparing traditional Japanese cuisine (i.e. washoku). The thinner, lighter, sharper blade allows the chef to cut with more precision and detail than a double-bevel blade would. Most traditional Japanese knives are designed for very specific purposes (e.g. yanagiba is for sushi; mukimono is for decorative cutting).

Let’s now take a further look at each style, and list the different knife types of each.

After World War II, Western style foods — especially meat — started to become popular in Japan.  Traditional knives were not as suitable for cutting meat, so Japanese knife producers began to craft double bevel blades based on French and German knife designs.   The Japanese versions were generally thinner, lighter, and sharper than their European counterparts.

Below is a full list and description of commonly found Western style Japanese knife types, as well as typical sizes you will find them in.

An all-rounder, the Japanese equivalent of the classic French chef’s knife.  Recommended for all chefs to have.  Can be used for meat, vegetables and fish.  The pointed tip also makes it useful for detailed work.  The name gyuto literally means “beef-sword”, as it was originally designed for cutting chunks of meat.

Check out my list of the Best Gyutos under $100

True to its name that means “three-uses”, the santoku is an all-around knife that can be used for meat, vegetables and fish.  The design is sort of a mix between a gyuto and nakiri.   Traditionally has a very flat blade profile, although recently some companies have begun making more curved blades to cater to Western habits.  Its convenient size and versatility makes it the most common knife found in Japanese households.  Sometimes also known as “bunka-bochou“, which literally means “culture knife”.

Japanese version of a paring or utility knife.  Good for peeling and slicing fruit, smaller vegetables, and chopping herbs.  Sort of shaped like a small gyuto.

Very small knife for peeling and carving fruits and vegetables.  Unlike Petty knife, it is meant to use in hand, not on the cutting board.  Many different types of blade shapes  can be found depending on intended usage.

The Chinese chef’s knife adopted by Japanese chefs for making Chinese cuisine.  With its rectangular blade and robust handle, it’s another great all-around knife for chopping, crushing, mincing all types of ingredients.  Some heavier blade versions can be used to chop bone, and protein.

Popular knife with a thin rectangular blade, used for chopping and mincing vegetables and fruit. Quick and efficient.  This is a lightweight knife and not to be used for heavy duty chopping (despite its resemblance to cleaver).  Flat blade profile makes it perfect for push-cutting technique.

The ultimate slicing knife.  Its long, narrow blade makes it good for slicing fish and meats, as it can cut smoothly without sawing and damaging fibers.  Sort of a double beveled version of the traditional Japanese style sushi knife, yanagiba.

Distinguished by the pointed tip, this knife was specifically made for taking apart poultry by cutting through the joints (not breaking through bone).  Sometimes used for filleting fish.  Can also be found as single-bevel version.

Bulkier version of the Honesuki.  Used to break down larger poultry and cuts of meat.

Recognized by its long, serrated blade.  Originally created to cut bread and baked goods without crushing them.  They are also very useful for cutting things like large melons, and cooked meat.

A shorter, stockier knife with very pointed tip.  Designed for cutting chops and other butchery tasks but not for cutting through bone.  Best used for cutting apart hanging meats.

Sturdy blade, specifically designed for cutting frozen foods.  Most versions have a serrated edge which can be used to saw through foods.  Others have flat edge, and are more like a sturdier, thicker gyuto.

Before the influence of Western culture and foods, Japanese diet consisted mainly of fish and vegetables.  Traditional Japanese knife types were specifically designed to prepare these ingredients.

Traditional knives are mainly found with single-bevel blades, although a few have double-bevel. Each knife type is meant for a very specific task. There are also slight differences in design by regions in Japan.  As a result, there is a HUGE variety of traditional Japanese knife types.

Below is a list and quick description of traditional Japanese knife types. The three most essential types to know are yanagiba, deba, and usuba.

Yanagiba is the most popular, and commonly found, sashimi-bocho (i.e.  sashimi knife).   Its long, slender blade is perfect for making the necessary fine, clean, and precise cuts across the fish fillet. The thin blade also helps to preserve the texture, and flavor of the fish, while maintaining its beautiful appearance.

It is typically used with pull-cut technique to make a single clean cut through a fish fillet.   The name yanagiba literally means “willow leaf blade” in English.  Part of the essential kit of a Japanese chef.

Thick, more robust knife that is traditionally used for filleting whole fish.  Some users have adapted it to taking apart poultry. Its weight allows it to chop through thin bones.  Thin pointed tip allows for more delicate work, and perfect for filleting.  Comes in a very large range of sizes and variations, to be used depending on size of the fish.

Professional chef’s version of the nakiri.  Very thin, rectangular shaped blade makes it perfect for preparing thinly sliced vegetables.  The extremely flat blade profile means that it should be used with push-cut technique (not rocking).  The tall blade is great for preparing larger vegetables (e.g. cabbages), and also allows the chef to places his knuckles against it as a guide.  Usuba is used to perform the katsuramuki peeling technique.

Kama-usuba or Kamagata Usuba is the Kansai (Osaka) variation of the Usuba.  Distinguished from the more common usuba (from Kanto/Tokyo) by its sickle-shaped tip, which is more useful for decorative and precision cutting techniques.

In Japanese fugu means “blowfish / puffer fish”.  The lean long blade of the fuguhiki knife was designed specifically for making sashimi slices out of the delicate fugu. Narrower and thinner than the yanagiba sashimi knife.

Funayuki literally means “going on boat”.  It is a very versatile knife, that was traditionally used by Japanese fishermen to clean and fillet fish.  Also suitable for cutting meat, and vegetables as fishermen would often use it to prepare their meals on board.

Length of a yanagiba, and height of a usuba.  A general purpose knife for preparing traditional Japanese cuisine.  As essentially a hybrid of two knives that have very different purposes, it requires great skill to use.   Can also be found in double bevel versions, known as kiritsuke gyuto.

With its thin, slender blade it’s perfect for filleting fish but can also be used for cutting sashimi. It is considered a hybrid between a deba and yanagiba, as it can perform both knife’s tasks, though not quite as well as each individual knives.  The blade is thinner than the classic deba, but thicker and shorter than a yanagiba.

Named after the Japanese art of creating artistic garnishes, this knife has an angled tip which can be used to make decorative incisions in vegetables.  Also sometimes used for general purpose peeling and cutting of fruits and vegetables.

Long and straight with a distinctive squared off tip, this sashimi knife specializes in preparing octopus (“tako” means octopus in Japanese).   Originally from the Kanto/Tokyo region (yanagiba is from Kansai/Osaka region).

Combination design of yanagiba and takohiki sashimi knives, that can be used for the same purposes.  Easily identified by its unique samurai sword like blade tip.

A knife with an extremely long blade, used for cutting tuna and other very large fish. Its flexible blade can adapt to the curve of the spine of the fish, thus avoiding waste.  Usually only found in wholesale fish markets, not in restaurants.  Its extremely long length often requires two people to use at once.

Knives specially made for cutting noodles like udon and soba.  Very unique shape, with a tall, completely flat blade extending all the way beneath handle.  Front of blade is meant for scooping up noodles once cut.

A knife specifically made for preparation of mochi (traditional Japanese rice cake). It can be found in single handle, as well as double handle versions (see image above). There are also versions that look like paper cutters. The long, tall blade helps cut cleanly through large mochi dough blocks.

As you can see from this list, there is basically a Japanese knife for everything. There are even more than I have listed here like tofu knives, jelly cutting knives, sushi-roll (maki-sushi) knives , and more!  I may continue adding to this list in the future.

Subscribe to my free newsletter for more interesting articles about Japanese knives. 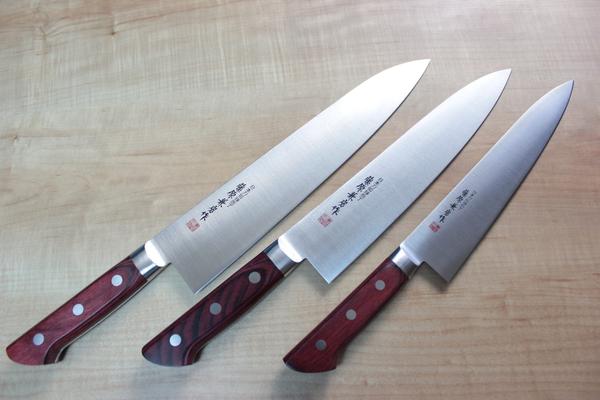