Why does this teriyaki chicken taste so damn good??  Why does my cooking taste like sh*t?  Why is this world so unfair??

You ​may have had thoughts like this go through your head when eating something delicious, then thinking about your own cooking.  Well, I have anyways.

Don’t worry. With some essential Japanese ingredients, creating those mouth watering flavors is not as complicated as it may first seem.

In this article, I have researched a few of the most important ingredients used to create those unique, mouth watering flavors found in many popular Japanese dishes.

With these ingredients (and some practice), you will soon be able to start creating authentic, delicious Japanese flavors. Your friends will think you are a sorcerer.  Read on to find out more.

The 9 Essential Japanese ingredients for seasoning and flavor

If you go to the supermarket and look at all the different spices, seasoning, and sauces available, you will easily be overwhelmed.  You may think to yourself, “Just buy some pre-made food or instant ramen and call it a day.”

​Luckily for you, I have done some research..

Nine items. That’s all you need to start.  You could probably get away with just six or seven, but let’s try not to cut too many corners.  Best of all, you most likely already have 3 or 4 of the items, so there’s not much left to buy.

Let’s first take a look at the 5 most important seasoning ingredients — known throughout the Japanese culinary world as SA-SHI-SU-SE-SO.

Humans have 5 basic tastes:  sweet, salty, sour, bitter, and umami.  Likewise, there are five main ingredients that make up the foundation of all Japanese flavors  With various combinations of these 5 Japanese ingredients, you can achieve many of the basic Japanese flavors that you know and love.  These ingredients are referred to as “SA-SHI-SU-SE-SO（さしすせそ)”  and consist of the following five items:

The term SA-SHI-SU-SE-SO not only refers to the ingredients itself, but also to the order in which to use them to get optimal flavor (mainly for boiled/stewed dishes).  Add sugar first, then salt, and so on.   This is not just based on some old wives tale, but on actual scientific fact.

Sugar adds sweetness to your dish.

​Sugar is usually added in first (i.e. before salt), because ​its crystal size is larger and takes longer to dissolve and infuse​ sweetness into other ingredients.  ​Sugar also helps to soften ​your ingredients which helps the infusion of other seasonings and flavors in later steps.

There are many types of sugar to choose from (e.g.  white, brown, caster, confectionary, cane, coconut, etc.).  Each sugar generally has its own specific use.  There is even a special Japanese sugar called “wasanbon (和三盆) ”, which is traditionally used for Japanese sweets. ​Best to just start out with plain white sugar, as it is the most versatile for cooking (and also the cheapest).

Salt ​adds saltiness to ​your dish.

​​Salt also draws moisture out from other ingredients, ​which makes it more difficult to add other flavors into it afterwards.  Therefore, it should always be added after sugar, or else your ingredients will not be able to absorb as much sweetness.

Similar to sugar, there are a ton of variations of salt to choose from.  For beginners, just start with some table salt or kosher salt, as they are the most versatile for cooking.  If you want to get a bit fancy, you can go for some sea salt.

It also has many health benefits, and is sometimes used to preserve or pickle ingredients.

​There are many types of vinegar (rice, fruit, balsamic, black, etc.); each has its own unique taste.  The most common vinegar for Japanese cooking is rice vinegar (used to make sushi rice).  Other vinegars are used for desserts, dressings, and other seasoning.

​Vinegar ​is a fermented ingredient, and is usually put in last while cooking because ​it will begin lose their unique flavour as heat is applied.   If vinegar is put in too quickly, it will lose its acidity, and cab damage the flavour of your dish.  The same applies to the next two ingredients — soy sauce, and miso.

Soy Sauce​ adds saltiness and umami.  It is also used to add color and fragrance to your dishes.

Soy sauce is an extremely important ingredient in Japanese cooking, and is used in seemingly 90% of dishes.Soy sauce ​should usually be ​added near the end of the cooking process.  If put in too early, or heated for too long, it will lose its unique fragrance and flavour.There are many brands, and types of soy sauce available from ​various regions of the world (i.e. Chinese, Japanese, Korean ​versions).  For Japanese soy sauces, there is mainly dark or light soy sauce.  Light soy sauce actually has a higher salt content than dark, as well as a bit more sweetness.  If you can, get one of each.  ​If you only want to buy one​, start with a Japanese dark/all-purpose soy sauce, as it is the most commonly used in Japanese cooking.

Learn more about shoyu in this article “What is shoyu?“

Miso paste is made from fermented soybeans mixed with ​some combination of other ingredients such as rice, barley and koji.   It is one of the ​more uniquely Japanese ingredients…and it’s not just for making miso soup​!

Miso is usually the very last ingredient to add when seasoning your dish.  This is because — similar to soy sauce — it will lose its unique flavor and scent if cooked or heated too ​high or too long.  That is why you always add miso paste at the end when making miso soup.

There is a huge variety of miso differentiated by its color, region, and ingredients.  It is most commonly categorized by color — red, white, or yellow.  Yellow miso is the most “all-purpose” version, so I recommend starting with that.

​The Other Essential Japanese Ingredients

​After the ​five ‘S’ ingredients listed above, the next two are ​alcohol based — sake and mirin.  ​Both alcohol ingredients are used not only to enhance the flavor of your cooking, but also to remove smell and tenderize meats and fish.

​Sake is a traditional Japanese alcohol made from rice and water.  Similar to wine in Western cuisine, ​it is not only enjoyed as a drink, ​but also commonly used in cooking.  ​​There is some sake specifically made for cooking, so you don’t need to waste your expensive drinking sake. ​

Sake adds ​umami​ and sweetness to do your cooking.  ​​It is a fermented product which contains antioxidants, so cooking with sake also offers you some great health benefits

Sake is often added earlier in the cooking process to ​give ample time for the alcohol to evaporate.  It should also have time simmer with the food to let ​it better absorb the flavors. If added too late in ​your cooking, you will end up with a harsh flavor.

If sake is not available, you can substitute with a dry sherry or even Chinese rice wine.

​​Mirin​ is a sweet, syrupy Japanese rice wine that has a lower alcohol compared to sake, but higher sugar content. ​

Mirin adds sweetness and umami to your cooking.  It is often used to make sauces and marinades as its sweet flavor contrasts nicely with saltier seasoning ingredients like soy sauce or miso.  Sometimes, it is used directly as a glazing agent to add a nice shine to your dishes.

In general, there are ​3 main ​categories of mirin ​available based on quality, alcohol content, and your budget: hon-mirin (i.e. “real” mirin, 本みりん), ​mirin-​style ​seasoning (みりん風調味料), and mirin-type ​seasoning (みりんタイプ調味料).  Your cooking process​ may change depending on which type you have.

Hon-mirin, or real mirin, and is made using a traditional fermentation method of glutinous rice, rice koji, and shochu or brewed alcohol.  It contains around 14% alcohol, and is the best, but most expensive option.  It is actually considered an alcoholic beverage so can only be purchased from shops with a liquor license.

​Mirin-style seasoning​ attempts to mimic hon-mirin flavors with a blend of sugars, syrups and other ​ingredients.  There is 1% or less alcohol, ​and it can be purchased cheaply from any food shop.

​Mirin-type ​seasoning ​​​​​​​has a similar alcohol content to hon-mirin, but with salt (and possibly other syrups) added, so it is not considered an alcoholic beverage.  It is cheaper than hon-mirin, but ​you need to consider the added salt when cooking.

If you can’t find any type of mirin where you live, you can also scrap together a quick replacement by mixing together sake and sugar.  ​The ratio of sake and sugar should be 3 to 1 (e.g. ​3 t​sp drinking sake, with 1 tsp of​ sugar).

​Put simply, ​dashi​​​​ is Japanese soup stock.  It is the Japanese equivalent of bouillion in French cooking or various broths in other Western cuisines.   ​Dashi adds immense umami flavor to your dishes.  It is used in a wide variety of recipes including rice dishes, stews, grilled foods, and of course… soups.

​The most common or popular form of dashi is made with ​​dried konbu (a type of seaweed) and/or katsuo (bonito flakes).  ​​There is a huge variety of dashi made from​ many ​different types of vegetables, seafoods, fish, meat, ​or some combination of them all.   Each has its own unique flavor and usage.

You can quite easily make traditional dashi from scratch at home if the ingredients are available.  Or, if you are a bit lazy like myself, ​there are ​many ​”instant” dashi powder/cubes or pre-made dashi packs (i.e. dashi tea bags) available — ​all you need to do is add water :).

​I wasn’t really sure if I should include cooking oil, as it is ​​more of a functional ingredient rather than for flavor.  Japanese cooking generally uses standard vegetable oil or canola oil.  It is cheap, and has a neutral flavor which allows the other seasoning, and ingredients to stand out.  This is in slight contrast to Western cooking, which ​often uses types such as ​olive oil which tends to add unique flavors and aromas to your ​cooking.

With just the nine essential Japanese ingredients listed above, you will be able to create authentic Japanese flavors for many popular dishes like teriyaki chicken, gyu-don, oyako-don, miso soup, and more.  Of course, there are a ton of other ingredients you could have stocked in your pantry, but these nine are ​a great start.

What do you think about this list?  Am I missing anything​ essential?  Let me know by leaving a comment below ! 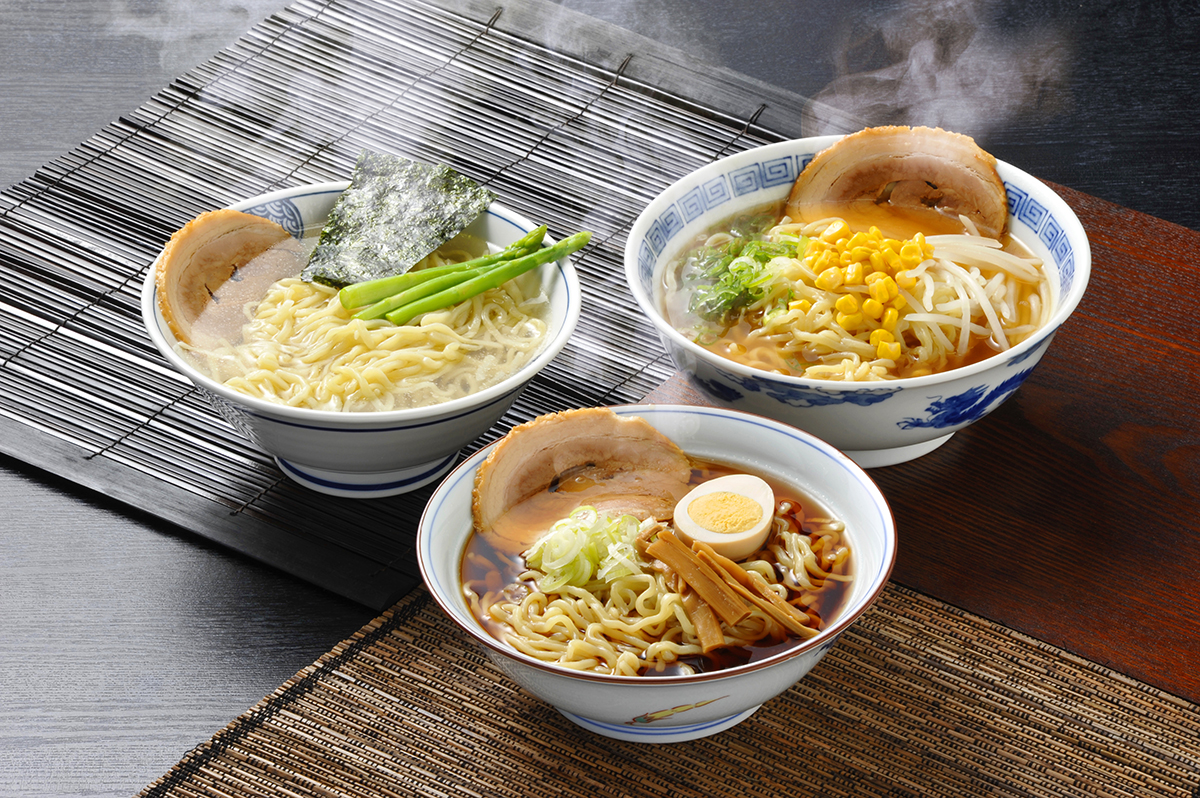 Udon vs Soba vs Ramen: A Detailed Comparison

Read More »Udon vs Soba vs Ramen: A Detailed Comparison